I started writing again properly this week. Up until now I’ve done bits and pieces – and a book, of course – which have kept me busy. But it wasn’t writing writing. It didn’t feel like fun.

Writing is fun. For me. And it was a desire to bring back that fun that led me to start doing this blog. For a while I’d felt something was missing; sure, I was putting words together, and I was writing, but I wasn’t enjoying what I was doing. When I started blogging, in 2007 – six bloody years ago, if you can believe that – I felt the words fall like rain onto the screen. It was a cloudburst. It felt like it had to happen. This was a release of energy, or thought – blogging was like writing poetry, or painting; it was a way of ‘getting it out’ – whatever ‘it’ was.

As I became more successful, I found it harder and harder to write. It shouldn’t have been that way, but it was. I struggled to get the words onto the page. I began to dread everything I wrote because I knew how many people were going to read it and comment on it and automatically tell me I was wrong about everything because they knew better. I anticipated all of that and began to try and write with that in mind. It was like I was trying to think about defending myself rather than asserting myself. It wasn’t great writing, most of the time, although I am still proud of a lot of it.

Then, this week, I got back to the page. I got back to blogging blogging. Think – write – publish. Go, go, go. No hassle. No ruminating on what you should be writing or who you’re writing for or what you ought to be saying or who else has written something different. Just write.

Writing is one of the most amazing things in the world. These 26 characters dancing around on the screen or the page, telling a story, perpetuating the thoughts in your head. It is a joy, a triumph, a spectacular thing.

It’s made me think about how children write and how we teach them to write. And I had a look at some work by a Year 5 pupil that interested me quite a lot.

One thing I really like about that book is the title: “creative writing”. It’s something that makes me smile. Creative writing. Such a lovely thing. Not a ‘literacy’ book but a creative writing book. Here’s where we’re going to create. 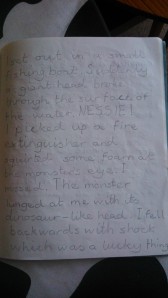 But there’s something else about that teacher I should tell you, and it’s quite significant I think. When we had free time in class, some children wrote, drew, some children did computers (we had BBC Micros and ZX81s) and some children played games. I wanted to write. “Can I write sir?” I said, and he gave me some paper, and said I should write anything I wanted. I wrote, and wrote, and wrote. You might think “So what?” but it’s carried on into my teaching that I do today, when I have the chance. Sometimes, when someone wants to write, let them write. Don’t tell him to read if he wants to write.

As a teacher, you’re told that you should ‘model’ the enjoyment of reading to children; but we’re never told to model the enjoyment of writing. Writing is business time; reading is recreation. I think that’s bollocks. Writing is more fun than reading for me and it always has been. Here was the first teacher who’d ever actually understood that.

Different things work for different children. I remember trying to structure pieces of writing and hating it, loathing it, despising it; I remember trying to write like bullets from a gun and finding it wonderful. As ever in education I think there needs to be a variety of different strategies employed to try and gain the widest possible success – some children will thrive on Talk For Writing and others will want to curl up and cry every time they have to do a silly action for the word ‘meanwhile’. We’re all different, as adults and children; it’s all about finding the way to the goal that gives you the greatest success – and the greatest enjoyment. Let’s try not to forget enjoyment in all of this.

Look at that piece of writing in that Year 5 child’s book. Has he used speech marks? Has he used long and short sentences to vary sentence length for effect? Has he written for purpose? Has he shown a range of punctuation? Is the main purpose of the writing clearly and consistently maintained? Did he plan and revise and check and proofread and improve and polish his work using his Special Polishing Pen?

What I do know is that he had fun doing it.

What I like to do is just to get writing down. Just write because you can and because you do. Just write. Write a poem. Write something. Express something, a thought, in words, and make those words explode onto the page. Get away from that headache about The Big Write and the perfection of every paragraph, and the levels and the expectations – just write because it’s great. It’s one of the most amazing things you can ever do – and everyone can do it.

It’s not always a popular strategy – in one of my many failed teaching interviews, a very friendly and pleasant headteacher seemed quite angry that I had done a poetry lesson with children. “I couldn’t see what the point was of writing a poem,” he said, quite offended, as if I had told the children to smear their own shit on the page. That was me told off, then.

A few people, like the avuncular Pie Corbett (yes, Pie) have found ways to try and liven it up a bit, by explicitly linking the path between talking and writing – and that’s great. But there’s another way too, I think. Write yourself. Be a writer. Do it because you enjoy it. Don’t do it because you have to write, or it becomes a chore, or task, and it will only potentially attract those who already have some kind of flair for it.

Each letter should be a joy, each word a thing that sparks enjoyment and creativity and life. It can be and it will be. Writing isn’t just a means to an end. It’s not just a way of making you gain some marks. It is a pleasure in itself, and if it isn’t, you’re doing it wrong, or you’re being told to do it wrong.

I realise that now, especially this week, starting my own writing again. I remember now why that Class 3 Steven Baxter wrote, and wrote, and wrote. And why he writes now.

Posted by stebax on October 19, 2013 in Uncategorized