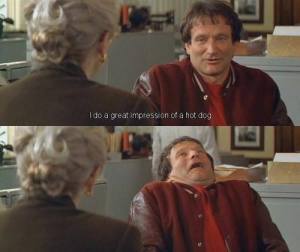 When a famous person dies, there’s always interest. When a comedian takes that final regrettable step and takes their own life, it’s easy to fall back on the ‘tears behind the laughter’ cliches. But depression is not a straight line from birth to self-inflicted death. It isn’t always a downward trajectory. It needn’t end that way, though sometimes it does. 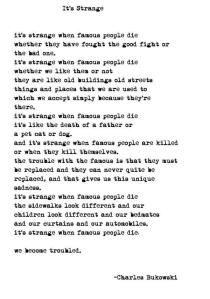 People have said it’s a ‘battle’ with depression. I don’t know if that’s my experience. It’s more of an existence. I don’t battle. I think there was a time when I did try to battle, but I don’t know if that was healthy or unhealthy. I tried to battle because it seemed like the best thing to do. You create in your mind an idea that one day you will be free of depression; that if you can ‘beat’ it then you will be free of it. I don’t think, now, that’s a realistic ambition. I don’t think you can win, but that’s not to say you have to lose either. You don’t have to fight. Part of it’s acceptance: accepting that this is how you are.

It affects you when someone famous ends up hurting so much, especially if you feel that you might have some kind of insight into that hurt. Of course everyone’s life is different and we’ve all been through different things and parsed them in different ways. There is no common shared experience of depression, just as there’s no common shared experience of anything. All the same, you do wish there was some way people could reach out to one another.

If some crumb of comfort could be taken from a sad prominent death from depression like this, it’s the idea becoming more widespread that depression isn’t something that only happens because of a sad event, or because of a spiral of disappointing things. Sometimes people with the best lives or the most material possessions can be depressed – though that isn’t to dismiss depression as a luxury of the ‘worried well’ either; there are many thousands of depressed people who are unemployed or barely scraping a living. The latter category of people are the ones who are most at risk, since they are the least able to access private therapy, relying instead on the ever-slowing machinery of state healthcare, which, cut a thousand times in recent years, struggles to process people and offer them the best help.

There is help out there, but it often comes too late. Often you have to wait until you are in crisis before your mental health is seen as something that requires care or treatment. We need helplines and we need places to go in a time of crisis, but we also need the day-to-day help. We need to be reached out to, not always do the reaching out when we are at our weakest.

Posted by stebax on August 12, 2014 in Uncategorized

← I’m chicken art
Why it matters →

One response to “Life and depression”